Special Olympics Indiana started the Play Unified program about 20 years ago allowing high school athletes with and without intellectual disabilities to compete together in basketball. Today, the program has expanded nationally, includes almost every sport the organization offers and is beginning to make an appearance on college campuses.

Through partnerships with colleges across the country and ESPN, Special Olympics has begun its Unified Sports Rivalry Series. The rivalry games draw excitement, which Special Olympics is able to feed off of to raise awareness and money for the organization.

“We’ve associated that game with the Old Oaken Bucket game as a way of potentially adding a little interest and awareness of our work,” said Michael Furnish, president and CEO of Special Olympics Indiana.

More than half of Indiana’s high schools participate in some type of unified sports activity. Special Olympics Indiana officially competes in the Indiana High School Athletic Association (IHSAA) with unified teams in track and bocce.

“As students graduate from high schools, they’re going to college, many of them in Indiana, and are very receptive to and in some cases are even motivated to start Special Olympics kinds of programs on college campuses,” Furnish said.

Jacob Bartelson, a Ball State senior, has a twin sister, Alyssa, who competes in Special Olympics and is about to age-out of the high school program. Both Jacob and Alyssa were diagnosed with varying degrees of cerebral palsy, and while he has a very mild case, Alyssa is wheelchair-bound.

Bartelson also said it’s neat to see the athletes succeed and be rewarded and celebrated.

Furnish first got involved with Special Olympics because of his love for sports. He said it was the people he got to meet through the organization that made him stay.

“What Special Olympics did for me back in the 1970s is the same thing we’re kind of hoping it will do for the young people that are playing this weekend and throughout the year,” Furnish said. “We hope to inspire people to take Special Olympics as their cause [and] to consider doing work in their professional lives that will make a difference for these folks that they get to meet through Special Olympics.”

He added the athletes participating in the Rivalry Series game this weekend have been practicing for weeks. The students from IU and Purdue are getting to know the Special Olympics athletes on more than a surface level. Some of the men were competing within their fraternity to get the opportunity to play on the unified teams, Furnish mentioned.

“Just imagine the college students this weekend that are going to participate in the rivalry series game. Those guys have had a chance to meet Special Olympics athletes on a whole different level when they become teammates. They’ve got to know their name, what positions they play and what their skillsets are. And it literally changes people’s minds about our athletes when they have a chance to Play Unified,” Furnish said.

The biggest change he said he has seen with Special Olympics is the openness of people to accept and embrace the athletes. He attributes most of that to Play Unified, which he said has become a global movement.

As for which team Furnish will be cheering for on Friday, he won’t say. He will be refereeing the game but has high hopes for the outcome. 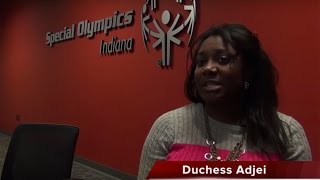